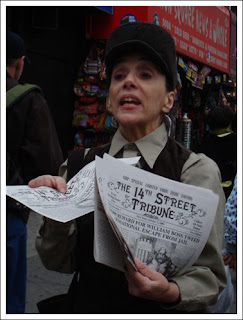 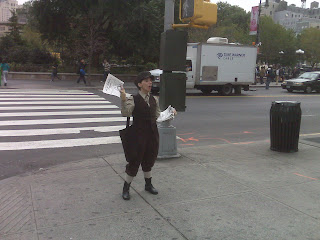 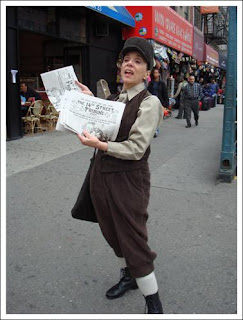 EXTRA! EXTRA! READ ALL ABOUT 14TH STREET
Come and Get Your Free Copy of "The 14th Street Tribune AIOP
Edition”

The Second Issue is available: Saturday, October 10th 8-11am The 14th Street NewsBoy (performance artist Lulu LoLo) will be hawking newspapers on 14th Street between Broadway & University Place—the South Side of Union Square.

The Second Issue is hot off the presses. This issue highlights the Grand Ball for the Prince of Wales at the Academy of Music with the startling news that the dance floor collapsed! Did you know that 14th Street was the center for theater, opera, and vaudeville? This issue tells of a teenage George M. Cohan and how critics panned Oscar Wilde’s play “Vera”. Don’t miss “Sightings” which tells you all about the comings and goings of famous residents of 14th Street. In this week’s ”Police Blotter” two police detectives have to drink six beers and two whiskies in order to make an arrest.

Friday, October 2nd saw the first appearance of the 14th Street NewsBoy hawking newspapers and the response was overwhelming. First of all my NewsBoy attire, thanks to the Fabulous Ramona Ponce stopped them dead in their tracks. Everyone loved my outfit! It is a new fashion statement! There were comments and compliments galore about how fabulous I looked. Strangers took my photo and sent them to me. Everyone who was wearing a newsboy cap took a newspaper. And one person told me he was only taking a newspaper because I looked so good in my costume. What did he mean costume? This is my working uniform.

Besides my attire "The 14th Street Tribune AIOP Edition Newspaper” knocked them dead. It looked so fabulous people couldn’t believe it was free. They loved the historic facts. One woman was taking a copy to her history professor at Columbia, children took them to school to show their teachers, people who do crossword puzzles (Cruciverbalists) wanted a newspaper for hints, memories of Klein’s Department store had a woman grab a copy out of my hand, even the competing 14th Street handbill people wanted a copy. Between Thursday’s press preview,opening and Friday’s first performance over 600 copies were given out free. And there are four issues total in the series —a true collector’s item.

And for the curious who missed the first issue—it contained the following stories: Boss Tweed's escape from jail, the shooting death of gangster Monk Eastman, former 14th Street resident Emma Lazarus whose poem graces the Statue of Liberty and other exciting histories of 14th Street including ticket forgery for a reading by Charles Dickens.